NOTE: This bot's type was marked as "ZERO". 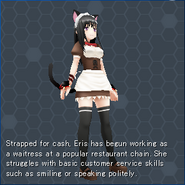 Gothic Punk Eris.png
Add a photo to this gallery

Eris has her core which activates her "wing" mode unlocking her 2 blades which are: Rulegnis (Glint Strike) and Fernognis (Dual Wield). Activating her core, allows her to use Rejection with her wings covering herself. And also, the most awesome weapon which can kill many player's robots. Darkness Hide can allow her to go into her enemies territory easily. Can only be seen with the [Catridge] Enemy Radar which allows all enemies and allies to be seen at the start>end (Even people with the [Catridge] Stealth System). And also noticing her popping up dark clouds from the ground.

Story (Available for other characters)Edit

Eris was a destructive, demonic, creature known as "Demon" by the ones she attacked, and Resha and Eris met on a destroyed, old, abandoned building church, Resha came and tell Eris that these are wrong, Eris raged, that the preachy types are the worst types Eris had, the two talked, and some time later enraged in a fight, Eris was the winner, Resha lost and saying her last words "If you're hurt, then you'll also hurt others?" (Something like that :3), Resha stood up with the last power, defeated Eris.

Retrieved from "https://cosmic-break.fandom.com/wiki/Eris?oldid=18346"
Community content is available under CC-BY-SA unless otherwise noted.