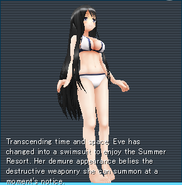 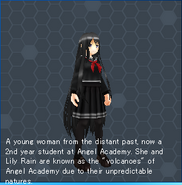 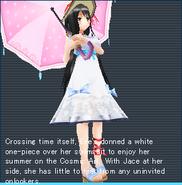 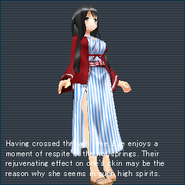 Add a photo to this gallery

Eve's hair is black and her eyes are black, she wears the mechanic clothes for transforming into a half-human and half-demon, in order to do this, she must activate "it".

'A young woman in the distant past. Once bound by shackles, her kind spirited did not go un awarded as a life to save him.'

Eve, has many weapons for her AIR Type School version, plus her original version, LND Type has many offense, but low range attacks. In her Bikini BF type, she only had range attacks, no offense attacks like her LND Type original form.

A young woman from the distant past. Once bound by shackles of regret, her kind spirit did not go unrewarded as a life she once saved returned to save her own.

Eve, who failed to protect her friends, rages and defeated the part of the enemy, is "Chaos", Chaos was defeated and retreated, due to Eve's anger, she destroyed what she shouldn't destroyed, Jace saying "Don't worry, we'll just be here" Eve calmed (Sorry guys for disturbing but I'm not really sure if he said that bcuz I forget one person said sorry! :3 Oh, and I dont know how she turned into a weapon of Lily's story :3), after several years of fighting, she turned into a destructive weapon, and was found by Lily, and now she fights with Lily in order to let the Chaos out and be defeated.

Retrieved from "https://cosmic-break.fandom.com/wiki/Eve?oldid=18866"
Community content is available under CC-BY-SA unless otherwise noted.