NOTE: Her Cost Capacity varies depends on how you upgrade Crimrose by her main level using Seraph Promotion items bought from shop. If you upgrade her at Lvl 8 she get 710, Lvl 9 for 740 & Lvl 10 for 770. Though, her BD name will be named as either ALPHA, BETA or GAMMA. 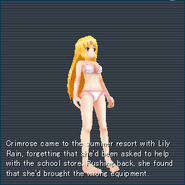 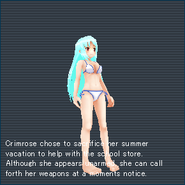 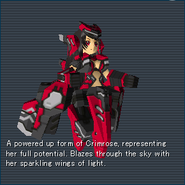 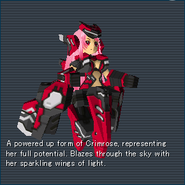 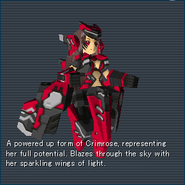 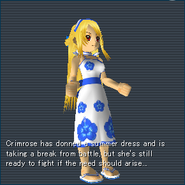 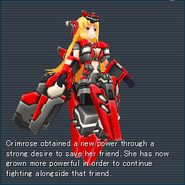 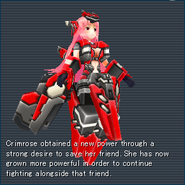 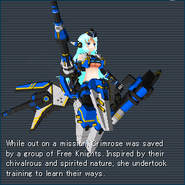 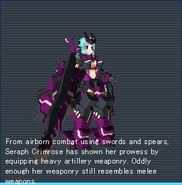 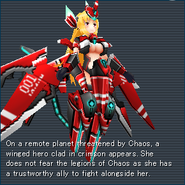 Add a photo to this gallery

Crim has a yellow/blonde hair, just like her old form.

--Summer version (Same with the Original-Chibi and Little forms)--

Crim has a yellow/blonde hair, wearing a summer outfit (blue and white flowers in it).

'Crimrose obtained a new power to save her friend. She has grown more powerful to keep fighting alongside that friend.'

--Original HD-- Crim has the infinite fly "Seraph Wing" to her 'right' mouse button, and also these two: "Seraph Kick" which kicks in mid-air (turns around and kick), "Seraph Nova" which activates for a few seconds, and throws for 1-4 or 1-6 guns to the enemy, if they stay in their place for a few seconds, they might damaged 45-70 damage to the enemy.

--Original (Little form w/ chibi ver.)-- --Little form-- Crim has the infinite fly "Seraph Wing", and the "Seraph Kick" to her 'right' mouse button. However she does not have the "Seraph Gun".

--Chibi form-- Crim has the same as the one with the 'Little form'.

Ivis, who got captured by the Chaos and forced into trickery that Ivis' enemies are the Cosmic Ark. Crimrose, who still doesn't know whats going on, wanted both of them to wander around ordered by the boss of Angel Force. Angel Force's boss, knew that Ivis is the enemy, sent, Winberll, Jikun Hu, Jikun Long and many troops just to get Ivis. Meanwhile Crimrose got tired, Ivis asking to rest for a bit, Ivis goes far to defeat her enemies. When Crimrose wakes up, they began to go on Angel Force again (Since the tour is already gone), Crim saw Winberll, Jikun Hu & Long and the troops defeated, blood war of Ivis. Crim who can't stand defeating Ivis, gained a new power. Seraph Crimrose. This is her chance to defeat her friend, laying 2 desicions: 'Defeat your best friend, reviving your defeated friends' or 'Don't defeat your friend, or your friends will be dead'. Crim chose (1 option) 1, defeating Ivis that she will come again to get her back fleeing away.

Retrieved from "https://cosmic-break.fandom.com/wiki/Seraph_Crimrose?oldid=17937"
Community content is available under CC-BY-SA unless otherwise noted.